A beautifull day for the celebration of the Croton

Every one was in commotion to.day, the whole city were on the move; and thousands of country people came flocking to see the procession. The stores were closed, bells ringing, soldiers marching, societys forming, and every one putting on their best faces to witness the novel scene.
At eleven Garret, the children, Bridget and myself went up to Mrs Anelli’s. They received us very politely, giveing us their small bed-room to ourselves. We had a fine view of the parade and were not exposed to the air. The procession, equalled my expectations, and was a handsome affair; every thing was so bright and neat, the very houses shone like silver.
The fire companies were very conspicuous for taste in their decorations. It was supposed the number of persons in procession, were about 20.000. 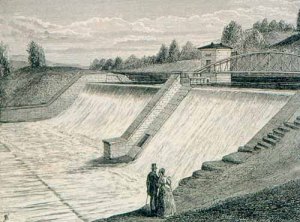 The streets, houses, posts, entries, were all thronged with anxious lookers on and all seemed gratified at the spectacle. We returned home soon after they passed, as the children became restless, and troublesome.
A bright moon closed the scene, and no doubt thousands of happy souls enjoyed its beams. All places of amusement were open and many illuminated for the occasion. It was a happy day for New.York, as now she stands a “queen city” with her beautifull Fountains, and pure transparent water, her delighted sons and daughters have reason to be proud of her now.

My eyes ached looking so much and I went early to bed. Mr H. walked down to see the illuminations.

———————————————
“On October 14, 1842, 167 years ago, New York City marked the completion of the Croton Aqueduct and the stream of cold, clear water it brought from the valley of the Croton River. The water’s arrival touched off celebrations whose like had never been seen before. At a time when the purity of Croton’s own water supply is in jeopardy from runoff contamination, it is appropriate that we remind ourselves of the benefits Croton’s pure, sweet water brought to the way of life in Gotham.”
For more on the Croton Dam, check out these links: Croton, Histories and Mysteries, Croton Friends of History, and Days of Hope and Glory.

A beautifull day, the sun obscured, and a cool
breeze blowing.

Surprised by a visit from Garret, he rode up at
twelve oclock. It was his intention to take Louis, and I home with him, but there was no boat.
At three oclock, we set off to ride seven miles, to see
the Dam at the Croton water works. Our ride was very pleasant the children behaving remarkably well.
The roads are very hilly in this part of the country,
I was afraid to ride down the steep hills. A severe
freshet* last winter carried away all the bridges, so we were obliged to drive through the Croton river, to reach the spot on which the new dam, is about being erected. Four hundred men are daily employed in repairing the dam, and live in huts, on the surrounding hills. Dame nature, seems to have indulged in some wild freaks in this valley; the precipitous mountains on other side of the valley through which the river runs. are steep and clothed with **verdure, to their summits.

The Croton is a small stream to supply so large a city
as New York. We had a late supper, and all slept soundly after our ride. Garret enjoyed it very much. G. brought two gallons of “Port Wine” up with him.

For more on Croton Dam , see the Croton Friends of History Blog. 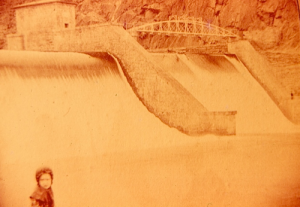 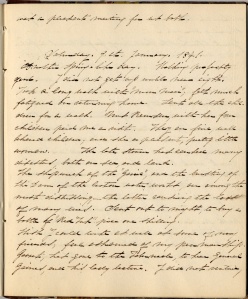 Saturday. 9.th. January. 1841. Another spring like day. Walking perfectly good. I did not get up until [sic] near eight. Took a long walk with “mon mari1”; felt much fatigued on returning home. Sent all the chil- dren for a walk. Mrs Remsen, with her four children paid me a visit. They are fine, well behaved children, and she a pleasant, pretty little woman. The late storm has caused many disasters, both on sea and land. The shipwreck of the “[G___ie]”, and the bursting of the Dam of the Croton water works, are among the most distressing, the later causing the loss of many lives2. Sent out to.night, to buy a bottle of “Red Turk”3 price one shilling. Wish I could write as well as some of my friends; feel ashamed of my penmanship. Garret, has gone to the Tabernacle to hear General Gaines4, and his lady lecture. I did not venture,… 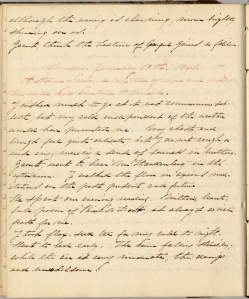 although the evening is charming, moon brightly shining [sic] on us. Garret, thinks the Lecture of Eugene Gaines a failure.
—————————————
1. mom mari – my husband
2. Refers to the following incident: “Two days of rain and melted snow sent the new Croton Lake fifteen feet over the lip of its dam before dawn on January 8. The impending disaster was contained temporarily by an earthen embankment below, but the embankment was breached, flooding the valley. Bridges, mills, and houses were washed away, and three lives were lost: two locals and one drunken laborer.”- A Struggle for Water – American Heritage Magazine: Winter 1994
Volume 9, Issue 3
3. Red Turk refers to the Red Turk Cap Lily
4. Edmund Pendleton Gaines (March 20, 1777 – June 6, 1849) was a United States army officer who served with distinction during the War of 1812, the Seminole Wars and the Blackhawk War.