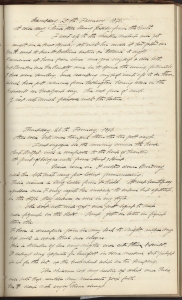 A cold day, Wind still blowing freshly from the North.

I went up to the Mantua (1) makers and got caught in a snow squall; sat with her untill it had passed over.
Mr H. went to hear Dr Bethune lecture on “Holland”, to night. I remained at home from choice, and gave myself a cold bath.
Mrs Remsen, and Mr Priestly came in to spend the evening; fortunately I had done scrubbing, and redressing myself went up to see them.
Deborah, had just returned from Washington, haveing called on the President on New Years day. She was full of news. G. was not much pleased with the Lecture. 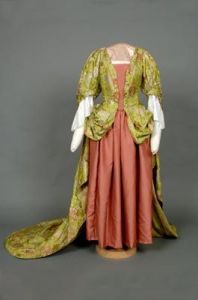 A mantua (from the French manteuil ) is an article of women’s clothing worn in the late 17th century and 18th century. Originally a loose gown, the later mantua was an overgown or robe typically worn over stays, stomacher and a co-ordinating petticoat. `Wikipedia